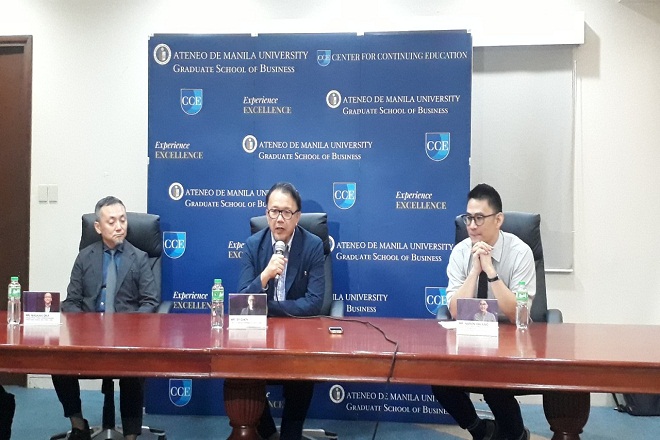 The first branding consulting company in Japan told Filipino entrepreneurs and companies on Thursday to dig deeper on what  branding they want to earn success on the evolving world.

Sy Chen,  founder and CEO of Creative Intelligence Associates (CIA) said they are known for the original approach of “futureology branding” and “prototyping process” which verifies the hypothesis through customers hearing.

“I think a lot of companies it’s very difficult to position themselves in the market amongst competitors and in order to position them properly, we go through a process of defining what is really their brand DNA that can be evolve,” Chen said in a discussion  held at the Ateneo Graduate School of Business in Makati City.

“And this is a process that is very unique and very helpful to help them find how to position themselves in the market. By creating a hypothesis of this futureology branding of where the brand should be, where the company should be three years later, five years later, seven years later,” he said.

Chen explained that they go through a prototyping testing verification process to check their hypothesis using their target customer’s feedback.

They interview customers through their psychiatric approach which they find effective with their clients.

“That enables the project to avoid high-risk and short-path to more successful track,” he said.

Chen said people have very short attention span and in such kind of environment, companies need to differentiate themselves in other companies.

“There are so much energy in the Philippines and the people our young and the economy is growing. At that stage it’s really incredible growth stage and there are so much opportunities,” said Chen.

“Each company has different DNA and that is what we really have to dig in and explore,” he said.

For his part, CIA Bootleg Manila Director Aaron Palileo said the Philippines don’t have the luxury of prototyping.

“Not a lot of brands in the Philippines are defining their DNA in what we called deepest, self-serving goals of the Filipino… we called it imprints. Psychological and conscious drivers of people when they buy and consume products and I think that what is the biggest difference that our companies here still have to learn,” he said.

“Most of the brands don’t have the patience or the audacity or the comfort of not knowing yet (their DNA). Finding a DNA is difficult,” he added.

CIA said Uniqlo is the first company who went through a prototyping process.

Chen told Filipino businessmen that achieving success in finding your own DNA brand is an education process.

“So they could learn from clues on how to approach and once they learn that clues and see the case studies they would be able to construct thinking. How can I apply that (case studies)? So our objective is to trigger them many questions so they could start asking and dig deeper to finding their path,” Chen told The Daily Manila Shimbun.

The two CIA officials said not only big brands but also small entrepreneurs who want to start their business can use their branding approach.

“They would be able to learn how to position themselves in the brand and they could ask question to themselves: What is my DNA? How do i evolve that?... they are capable on thinking what would be my future three, five, seven years from now more realistically,” said Chen.

“But ours is psychiatric approach, so we have to talk to them (customers), find problems and adjust, solution will fall in place,” said Oka.

“So instead of data on numbers, they could take all this living data they gathered through contacting and encountering with real customers,” he said.

Oka said though prototyping is more expensive they also find out that making a prototype store is more profitable than putting TV commercials.

“In conversion rate of TV news and commercial is 3-5 percent but if you built in working a prototype store, the conversion rate will be 5-7 percent so it’s profitable and at the same time we can have all the experiences in finding the DNA of each country,” he said.

“So I think that something you can try to start in the Philippines,” he added.